For 0-11th year-old customers in Sparekassen Thy awaits an exciting world of the Muhny mascot – a fun and cheeky cow with lots of pep and trouble coming.

Sparekassen Thy had indicated the need for a funny and fresh mascot that could attract both children and their families as customers in the savings bank branches.

Bamsefabrikken has from the very beginning been involved in the development of the mascot Muhny – from the first crazy thoughts to sketches and drawings, and development and production of costume, stuffed toys, piggy bank, etc.

The mascot Muhny is already several years old and has made speed carreer in Spar Thy, where she is always a popular guest. 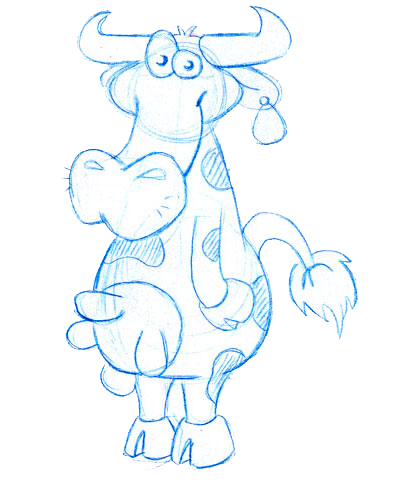 When Muhny was produced as a costume, we based the production on the many illustrations and molded and modeled the mascot.

During the proces of manufacturing the mascot costume, Spar Thy was included and followed the proces by photographs. They contributed to the proces with substantial input, corrections and additions to the costume.

The Muhny costume is equipped with a giant udder which always arouses attention, and the costume also has rotating horns and animated eyes, also called animatronics, which make her very lifelike. Animatronics can be programmed in advance, so they move automatically. Read more about animatronics here.

"Here at Spar Thy we’re really happy that we chose to go our direction and develope Muhny in close cooperation with Ibsens Fabrikker. It was worth all the money and trouble. Muhny is the primary reason that we’re strong in the family segment. The children love and know Muhny – and so do the parents. We’ve only experienced good service. We get good sparring and fuel for new ideas, and when we call, Peter always answers.. "